A five-mile backup greeted commuters Thursday morning on the westbound 210 Freeway through the second five-day semi-closure in the previous month to permit Caltrans to carry out main roadwork.

Vehicles have been backed up about 5 miles to Grand Avenue in Glendora, including about an hour to the morning commute from the Inland Empire, excessive desert and japanese Los Angeles County cities into the north San Gabriel Valley, downtown Los Angeles and the San Fernando Valley. 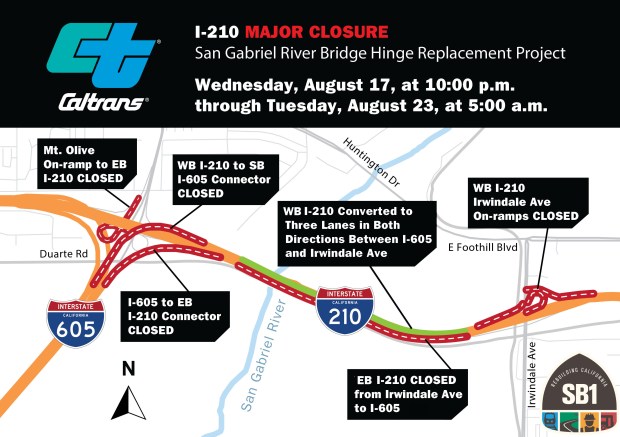 Eric Menjivar, Caltrans spokesman, mentioned on Thursday that each one that is supposed to finish by 5 a.m. Aug. 23, when the company is scheduled to complete construction and reopen the lanes.

While this second semi-closure is the mirror picture of a really related one which lasted from July 20 to July 26, when construction crews repaired and rebuilt the westbound part of the bridge, this time the eastbound-lane portion is being repaired and a piece changed with new rebar and concrete, a part of a $30 million project.

“Once we are done with this on Tuesday, commuters won’t have to deal with this anymore. No more long-term closures,” Menjivar mentioned. But there might be some single lane closures at night time as Caltrans replaces freeway medians and aspect obstacles, he mentioned.

While Caltrans posted 80 indicators alongside the 210 and different connecting freeways for weeks forward, sending out warnings to motorists concerning the newest work and lane reductions, it didn’t make some drivers happier.

In reality, some have been caught off guard.

“It was crazy. There was traffic the whole (expletive) way,” mentioned Jose Martinez, as he crammed his tank with gasoline at a station on Huntington Drive in Duarte after exiting the freeway.

Martinez, who was driving from Victorville into the San Gabriel Valley, was unaware of the construction and excessive lane reductions. “It was horrible. I was stuck in it for an hour. It started jamming at Grand Avenue,” he mentioned. Around 8:45 a.m., he left the gasoline station to rejoin the 210 Freeway westbound.

But just a few miles past the construction, a piece truck caught hearth, blocking three westbound lanes on the Sierra Madre/San Gabriel Boulevard offramp, backing up westbound visitors to Myrtle Avenue in Monrovia.

“Yeah, that made things worse. It was adding insult to injury,” Menjivar mentioned.

Hoping to keep away from the construction squeeze, many motorists hopped off the freeway in Glendora and Azusa, utilizing Arrow Highway and Foothill Boulevard. Both floor road instantly grew to become gridlocked.

Menjivar urges motorists for the following 5 days to plan alternate routes, together with the ten and 60 freeways, which have been heavier than regular however shifting Thursday morning. Some may take the L Line (Gold) light-rail prepare.

In Duarte, much like the quasi-closure in July, visitors started flooding in the morning onto Huntington Drive and Royal Oaks Drive, the latter a two-lane, east-west street lined by houses and a protected, grime strolling path utilized by walkers and bicycle riders.

Walking buddies Wanda White and Leslie Gallegos had that deja vu feeling on Thursday. As residents who dwell on Royal Oaks Drive, they remembered drivers utilizing their road as an alternate to the 210 through the 5 days in July.

“Last time you couldn’t leave your house. We couldn’t pull out of our driveway,” mentioned Gallegos.

This time, White may see the drivers glancing at their telephones, presumably directional apps to steer them across the gridlock.

They each nervous concerning the afternoon commuters coming westbound from Los Angeles. That queue may again as much as the 134 Freeway in west Pasadena and Eagle Rock, Menjivar mentioned.

“This afternoon will be really bad for cars on the 210 going east,” Gallegos mentioned. “That’s what we are dreading.” Statistics on what schools are doing to protect students – Daily News