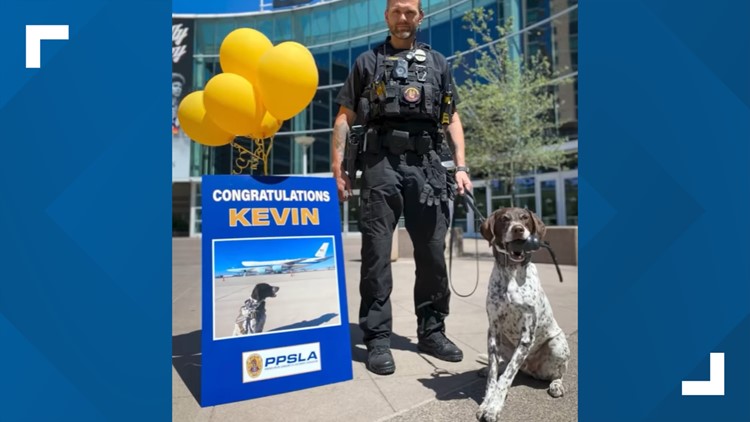 Kevin, a German Short-haired Pointer, has served with the Phoenix Police Department for six years. His job was to smell out explosives.

Kevin is a German Short-haired Pointer who was born in Germany again in 2013.

Trained to smell out explosives, Kevin was answerable for retaining harmful gadgets off of our transit system.

Kevin was a staple in downtown Phoenix, and he’ll be missed.

So everybody give a giant congratulations to one in all our fuzziest officers!

After 6 years of keeping our community safe, #PHXPDTransitK9 “Kevin” is ready for retirement! Kevin, a German Shorthaired Pointer, was born in Germany in 2013. He helped detect and deter explosives into the transit system and became a staple in downtown #PHX. He will be missed!

Posted by Phoenix Police Department on Friday, May 20, 2022

At 12 News, we pay attention, we search, we clear up for all Arizonans. 12 News is the Phoenix NBC affiliate owned by TEGNA Inc.

We are dedicated to hyper-locally serving all of our communities. We advocate for our neighbors, have an effect on optimistic change, and join our broader group to options.

12 News is the Official Home of the Arizona Cardinals and the proud recipient of the 2018 Rocky Mountain Emmy Award for Overall Excellence.

Stay related by downloading the 12 News app, accessible on Google Play and the Apple Store, and by signing up for our each day e-newsletter. Catch up on any tales you missed on the present on the 12 News Youtube channel. Read content material curated for our Spanish-speaking viewers on the Español web page.

Woman dies after found unresponsive in tub at Scottsdale spa